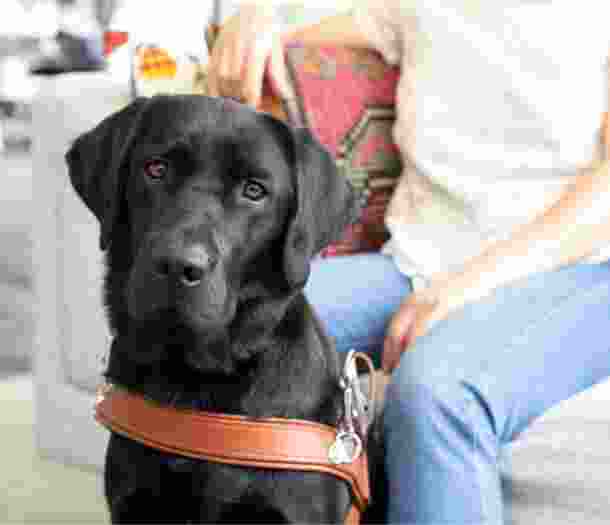 Three women at the end of a night out stand in a dark city location near the road waiting for a rideshare to take them home. One woman holds her stomach, another woman with a long cane (Dharna) is on her mobile and the third woman (Chloe) is standing next to her yellow Guide Dog. Dharna’s phone buzzes announcing that her rideshare car is approaching.

The screen becomes blurry to show Chloe’s point of view as she looks at Dharna and Dharna asks her if she wants them to wait with her for her rideshare. A red car pulls up next to the three women (Dharna’s rideshare), the camera focuses on the driver as he tells the three women there are no dogs allowed. The next angle shows the point of view of the driver as Dharna tells the driver that Chloe and her Guide Dog will not be getting in the car, she is visibly annoyed by the driver’s response.

The red car pulls away, the camera shows Chloe left alone standing with her Guide Dog. Chloe checks her phone as it announces that her rideshare is arriving. The scenes become blurred to show Chloe’s point of view as a white car arrives. The camera angle sharpens as the next scene shows the driver of the car tapping on his phone to cancel the rideshare. We see the scene from Chloe’s perspective as she watches the car drive away and in the distance sees someone walking their dog across a pedestrian crossing.

A black 13cabs car approaches Chloe. The focus becomes blurred as we see the 13cabs driver, Omar, get out of the car and approach Chloe, experiencing the scene from Chloe’s perspective. Omar opens the door for Chloe. Chloe gets into the front seat and her Guide Dog sits between her legs in the passenger footwell before Omar closes the door. The taxi drives away. Scenes of an empty street. The Guide Dogs logo and 13cabs logo appear on a white screen.